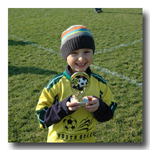 Today was Sammy’s last soccer game of the season, and I went a little crazy with the pictures. I think I must have taken about 200, and I’ve posted about 125 of them here. Jennifer went to more of the games recently, so I hadn’t seen them play in some time. I was impressed at how much better they were as a team than in the first game of the season.

Sammy’s team won the game, by a score of either 3-0 or 4-0, depending on whether the third goal counted, since it was kicked into their own goal by the other team. Everybody got trophies at the end. We’re going to have to put up a trophy shelf in the boys’ room, now that Sammy has this and his Bocce Tournament trophy.

Also, a couple of photos at the end of the bunch are from the Playdate with the Principal, this afternoon at Sammy’s school. 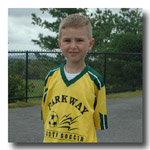 We’ve entered the ranks of suburban parents, with Sammy’s first soccer game this afternoon. He’s on a Division A team in Parkway Soccer, along with every other child his age in West Roxbury. Apparently, it’s just what you do, except that we didn’t know that in the spring when we had just moved here. Since he didn’t play last spring, it was a little dicey that he’d even get a spot on a team for the fall. Sammy would have been pretty disappointed, so we were pretty happy when we got an email from the coach on Thursday telling us to show up Saturday at 2:00 for the first game.

Sammy had taken soccer at the YMCA a few times. He really enjoyed it, but they played in a gym and mostly did drills designed for 3-5 year-olds. This was the first time he’d played on a team, and he did great.

Sign-up for spring T-Ball is apparently next week. We’re not gonna make the mistake of missing that one.